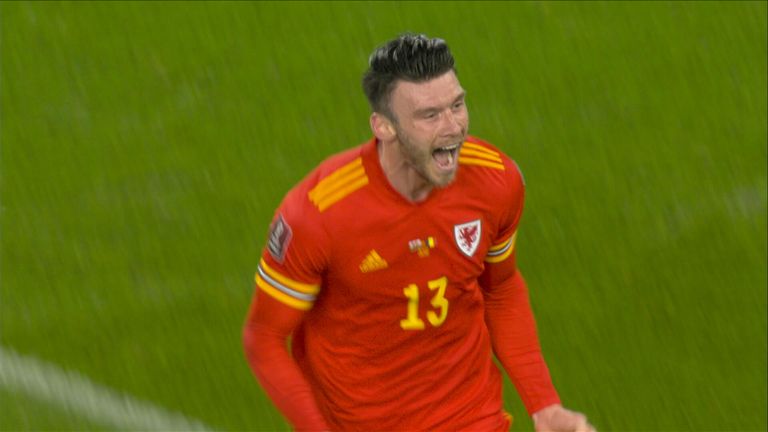 The plucky Welsh hold the world number one side to a draw in Cardiff. The result secures Wales second-place in World Cup Qualifying Group E!

Wales drew with Belgium 1-1, to earn themselves the runners-up spot, behind the Belgians, in World Cup qualifying Group E, in Cardiff on Tuesday.

Kieffer Moore cancelled out Kevin de Bruyne’s early strike, to earn the Welsh the point they needed to stay in ahead of the Czech Republic, who beat Estonia.

Despite having already guaranteed themselves a play-off place next March, courtesy of their Nations League results, finishing second in the group means that Robert Page’s side could now enjoy a more favourable semi-final draw.

Wales more than matched Belgium, especially in the second half, and Neco Williams was denied a spectacular late winner when his stinging shot was kept out by visiting keeper Koen Casteels.

Belgium, who won the group with 20 points, appeared content to continue their long unbeaten run in World Cup qualifiers, which now stretches to 28 games.

Wales, who have not lost a home qualifier for four years, are trying to reach the World Cup finals for the first time since 1958. They at least know now that they cannot play either Portugal or Italy in their play-off semi-final.

Things did not start well for Wales and it took Belgium only 12 minutes to go ahead, with De Bruyne clinically dispatching a right-footed shot inside the post.

Belgium looked in the mood to make Wales suffer and De Bruyne wasted a chance, after an error by Ben Davies.

But the Welsh unexpectedly drew level when Daniel James showed great persistence on the left, to eventually play in a cross to Moore, who stroked his shot past Casteels.

Belgium almost went back into the lead before half-time, when De Bruyne lifted a free kick towards Thorgan Hazard, whose first-time volley smashed against a post.

Roberto Martinez’s side continued to dominate possession after half-time, but Wales always looked dangerous on the break and were well worth a point that could prove vital if they are to take their place in Qatar in 12 months.

The Most Underrated Stars Ever! – Part II
The AFCON Diary: Two Palatable Matches on the Menu as AFCON Kicks Off!
Go to mobile version